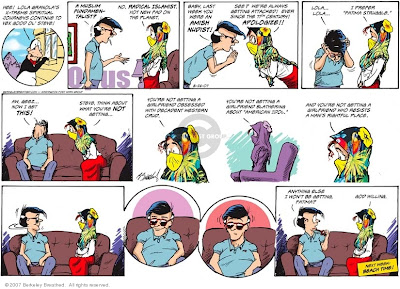 Normally I would put this under the Political Blog but being that Bloom County was comic that got me through my teenage years, but this hypocrisy seemed to cross all genres. Per comment from the Post, there was concern over the sexual innuendo and that Muslims might not take it in context. (Apparently Christians have a better sense of humor as the Opus strip poking at Falwell was run.)

The media does a fine job of telling you what is news. Obviously some are more concerned with potential violent actions in the face of comedy. Share the cartoon...offend someone.